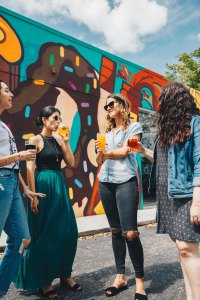 With marketing of alcohol and nicotine delivery products to youth, legalization of cannabis, and the crisis in prescription pain medication use, there are new opportunities to have conversations with youth about substance use and pregnancy, with the aim of reducing the harms and improving their overall health.

What do we know about youth understanding of substance use and pregnancy?

Existing research and data on youth behaviour provide a window.

One U.S. study showed a relationship between pregnancy and prior substance use among adolescents, and among younger adolescents in particular.

The McCreary Centre Society conducts an adolescent health survey in BC every 5 years. The 2018 evaluation is underway, but findings from 2013 indicated a number of factors related to youth substance use and pregnancy.

Those at higher risk for harmful alcohol use include:

Those at greater risk of being involved in a pregnancy include:

The Ontario Student Drug Use and Health Survey (OSDUHS) from 2017 shows that:

IMPART info sheet on “Youth, Gender and Substance Use” recaps how the harms of early substance use are gender-specific.

How do we approach building awareness and prevention?

Opening “Doorways to Conversation” about substance use and pregnancy allows for brief interventions and support for youth as well as women and girls. Many providers think that they need to have appropriately tested screening tools along with the knowledge, skills and confidence to conduct them. As one United Nations study found, less than 30% of health providers routinely screened youth for substance use for these reasons.(2)

Trauma-informed, culturally relevant, and gender-specific relational approaches build trusting relationships that can support youth who may be dealing with more complex issues like violence and abuse, gender identity, or the foster care system.

Promising Approaches for Reaching Youth on Substance Use and Pregnancy

Here are some current promising approaches to improving youth understanding of substance use and pregnancy in Canada.