Women in Alberta are facing an increasing risk of being murdered by an intimate partner and crisis calls are up 10 per cent in two years, according to new data from the Alberta Council of Women’s Shelters (ACWS).

The ACWS released its 2018 statistics on Tuesday, which showed shelters are serving more women, children and seniors than ever before.

The ACWS’s danger assessment is a series of questions that helps measure the likelihood a woman will be murdered by her intimate partner. Shelters also use the assessment as a way of describing women’s risk when they work with the courts, child welfare, and police.

The agency said In 2011/12, 54 per cent of women who entered shelters faced “severe” or “extreme” danger. The ACWS said this past year, almost two-thirds — 65 per cent — were in the same category. 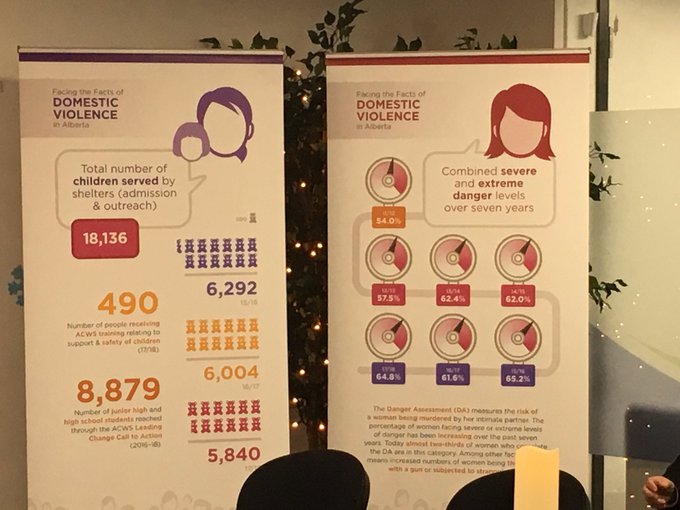 The ACWS said the move into severe and extreme danger categories indicates that, among other factors, more women are being threatened with a gun or subjected to strangulation.

READ MORE: Last year, 137 women were killed by someone they knew — each day

“We urgently need to address this issue as a society through more effective gun control, as well as ensuring shelters have the resources to support women through the provision of accommodation, safety planning and community outreach,” Reimer said.

A training seminar held in April focused on the danger assessment tool, which was recently updated to include three new groups: immigrant women, women in same-sex relationships and Indigenous women.

No separate data on Indigenous women were included in the 2018 report. The ACWS said it is working to align its data process with the First Nations Principles of OCAP (ownership, control, access and possession)

Women’s shelters are over capacity

The ACWS said rising demand for services has taken many shelters beyond capacity, and in the past year 16,722 women, children and seniors were turned away due to lack of space.

The ACWS said shelters are supporting more people than at any point in the past three years and because caseloads are at capacity, they are unable to accept as many new people into community outreach programs.

In the past year, women’s shelters have supported 6,408 people, including 340 men, through outreach programs.

The ACWS said nine per cent of women were living in stable housing after entering long-term apartment-style second-stage shelters. After leaving those, 68 of women reported being in safe, stable housing.

In the past three years, more than 18,000 children have either spent time in Alberta’s shelters or were helped through an outreach program.

‘We know that effective, early interventions to support traumatized children can make an impact in supporting those children to develop healthy brains and engage in healthy relationships as they grow older,” Reimer said.

A University of Calgary study has shown that during certain Edmonton Eskimos and Calgary Stampeders games, domestic violence rates rise as much as 15 per cent.

Give me Shelter campaign

Global Edmonton’s annual campaign to gather toys and other items for women and children fleeing domestic violence kicked off earlier this month.

The Give Me Shelter campaign collects basic needs like clothing and toiletries and provides them to five women’s shelters: Win House, WINGS, A Safe Place, LaSalle Residence and Lurana Shelter.

The campaign runs until Dec. 14.